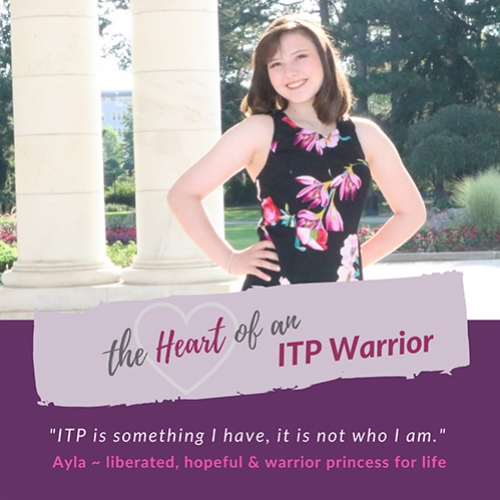 After 13 years of critical challenges and refractory ITP, an effective therapy liberates and renews hope for this young warrior princess.

My name is Ayla Charness and I have fought ITP for almost 14 years. I was diagnosed at 3-1/2, barely in pre-school, and am now 17 and just starting my Senior year of high school. When I was diagnosed my parents were told the same thing most families of kids with ITP are told, “give it 6-12 months and it should go away”. Of course, as my parents explain it, we should have known we were in for a bumpy road, five days in to the diagnosis. That is when I was admitted to the hospital for an 8-day stay because of bleeding they could not get to stop and low platelets that they could not get to come up at all. And to say it has been a bumpy road may be an understatement. That being said, I am so happy to share my story. I want to share both the good and the bad of my journey so hopefully people can understand that with the right amount of love, support and resiliency, you can succeed in spite of the challenges.

Recently I interviewed my Hematologist (that I have had for over 10 years) for a film I am doing about my heroes. He talked about my challenging road and how each escalation brought me in to a smaller and smaller group. Getting ITP as a kid is not common, having it become chronic puts you in much smaller company and being refractory where treatments do not work makes you pretty rare. Add to that the fact that I am termed a “bad bleeder” makes for a challenging life. It has been difficult dealing with the hundreds of days in the hospital, hundreds of treatment days, many hospital stays, three trips to the Pediatric Intensive Care Unit and over 400 blood draw, pokes and IV’s (along with having to deal with a few other conditions along the way). As weird as it sounds, I really feel that what made my journey, in some ways, easier than others is that I was diagnosed so young. I did not have to give up sports or other activities I may have previously done and quite honestly hospitals, doctors and this condition is the only kind of life I have ever known. It has been tough, scary, created a lot more days feeling horrendous than good and has made me grow up faster than I would have probably chosen. I have spent most of the last 14 years with platelets under 3,000 where a simple bloody nose would last for sometimes over 10 hours. That is the bad! The better is that FINALLY, after 13 years, I tried a treatment called Sirolimus and switched my IVIG to Sub Q IGG and that has brought my platelets and immune system to a safe level for over a year. This has given me hope along with some freedom!

Even though I have had this life altering condition, I have had extraordinary opportunities that would not have come without all of my struggles. I have been an Ambassador for Children’s Hospital Colorado along with being the Children’s Miracle Network Colorado Champion. In those two roles I spent two years going to dozens of events, talking about my experience and helping to raise millions of dollars for the hospital that has given me so much. For the last six years I have been a member of the Children’s Hospital Youth Advisory Council, working to help the hospital be a better place for the kids and families. Along with all of this I have worked outside the hospital creating Sport Purple for Platelet Day fundraisers to raise awareness and money for the PDSA. And of course, through the PDSA, I have made lifelong friends and gotten to share my “adventures” with others going through the same journey. I have also been involved with the PDSA teleconference support group, where I have talked to and helped other kids going through the same process I did when I was their age.

The best part of this condition is that I have never let it dictate who I am. My parents and I have always said that ITP is something I have, it is not who I am. I have received so much love, support and understanding from family, friends, teachers, school administrators and strangers. Because of this, I have been able to excel at school, I have been dedicated and passionate about my violin and piano (I play in both my school and top community orchestra) and have discovered film (producing, editing, etc.) as my newest passion. In fact, I love it so much that I am planning to major in film and music in college next year, along with making that my career.

I have been called courageous. I have been said to have resilience. I have been known to inspire. I honestly do not know about everything that has been said about me and my condition, but I do know that having ITP has not been all negative. I have no idea if the treatments and dealing with ITP will be something I will have for the rest of my life. Yet what I do know is that regardless of what happens, I WILL continue to stay optimistic. I WILL work to accomplish everything I want to do in my life. AND I WILL forever consider myself to be an ITP WARRIOR PRINCESS!