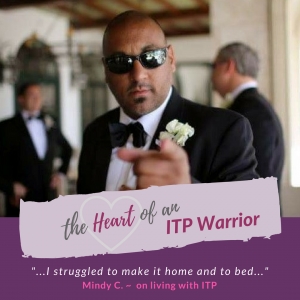 An unusual nosebleed and extreme fatigue on a flight home prompt this ITP Warrior to seek medical care.

My name is Manminder Singh Combow, but everyone calls me Mindy, lucky me, whereas I am a boy. I have been a resident of Houston, Texas for the past 10 years, but was born in Vancouver, British Columbia, Canada. As a young child, my family and I moved to Canada’s east coast to Halifax, Nova Scotia, which I consider my hometown. I am a dual citizen of both Canada (by birth) and the United States (naturalization, Jan 2017) but, as most Canadians are, especially proud to be a Canuck, not to mention, a Maritimer through and through. I enjoy playing/watching hockey, basketball, soccer, and, of course, cheering on the New England Patriots to a big win! I have a Bachelor of Commerce (BComm) degree and a Master of Business Administration (MBA) degree, both from Dalhousie University in Halifax, Nova Scotia. I have worked in the banking and financial services industry for over 20 years. In my previous life in Halifax, I was a Financial Advisor/Planner and grew a book of business of high net worth clients. After completing my MBA, I sold my client portfolio and moved to Toronto, Ontario. I worked in the financial/banking services industry there for 9 years with 2 large international banks in the downtown financial district (Bay Street). I was transferred to the US in 2007 by Scotiabank and recently accepted a new position with BB&T – Capital Markets, as Senior Vice President – Capital Markets - Corporate Banking..

In June 2017, I travelled to Halifax to visit my family before joining BB&T. On the day of my flight, I experienced an unusual nosebleed and felt extremely tired. I tried everything in my power to prevent the flight attendants and other passengers from seeing the blood dripping profusely out of my nose, fearing I would be asked to leave the flight. Luckily, I had napkins in my suit jacket that I had taken from the United Lounge, which I never do, and after 20 minutes the bleeding stopped. My flight landed at midnight and I struggled to make it home and to bed...I knew that I needed to see a doctor. The next morning, I went to the emergency room and after several tests and a (comparatively short) wait, I was admitted to the hospital for 7 days. Blood tests revealed that my platelet count was 19,000 - which is deemed as EXTREMELY LOW. A normal platelet count is between 150,000 and 400,000 and anything less than 50,000 is deemed an emergency, hence where I ended up.

In the Emergency at the Queen Elizabeth Sciences Center II (QE2) in Halifax, Nova Scotia, I was treated as a first/high priority patient. I was admitted right away and was set up for a brain CAT scan (for worry of brain hemorrhaging) and an ultrasound of all vital organs in my body. With fingers crossed and lots of prayers, the results all came positive…for the better, meaning that all was good and no internal bleeding, but there was something wrong and the doctors, nurses, specialists made it a priority to see what it was. After a full day in the emergency ward, the doctors diagnosed me with ITP (Idiopathic Thrombocytopenic Purpura). They explained what this disease was, how it affected my body, and the treatment options available to me. Their diagnosis and education explained all those days where I was so tired and lethargic and getting out of bed was a struggle, not to mention the unexplained bruises that would appear on my body, which now all made sense. I was grateful to finally know and understand the answer to this mystery that was in my life for several months (leading up to the diagnosis). In a nutshell, my body is developing antibodies. These antibodies are killing my blood platelets that are naturally developed from my bone marrow. Blood platelet transfusion is sometimes an option in low platelet count, but in this case, it would be a waste time and money because the antibodies would just take over the platelets. They diagnosed me with ITP and felt, due to how low my platelet level was, that they would like keep me in the hospital and monitor me 24/7 to make sure that I would not get any injuries in the “outside world.” Even papercuts at that time could have been life threatening, because of the risk that I may bleed out.

After a few days of testing (CAT scans, ultrasounds of vital organs, et al.) and medications, not to mention, sufficient rest and three solid meals a day, my platelet count rose steadily to 66,000 before I was released from the hospital (I was in the hospital for 7 days in Canada). I returned to Houston and have been diligent in taking my meds (Prednisone) and adjusting to managing my lifestyle around this disease. Since being on a high dosage of prednisone (80mg/day) for the past 3 months, I have experienced some of the common side effects associated with the drug – moon-face and weight gain. The weight gain has had a significant effect on my desire and ability to play league soccer and workout.

My hope is to ween myself off this drug, yet still maintain a reasonable platelet count and eventually go into remission. I feel strongly that education and support will help empower me to understand better what the treatment options are, as well as whether diet, exercise, and lifestyle can have a significant effect on my health. My hope is that as I continue to deal with the diagnosis, I can help my family, friends, and colleagues to better understand ITP. Spreading awareness and providing support is important to me. As the slogan says, ITP is tough to pronounce, but with your help and support it should and can be easy to live with.