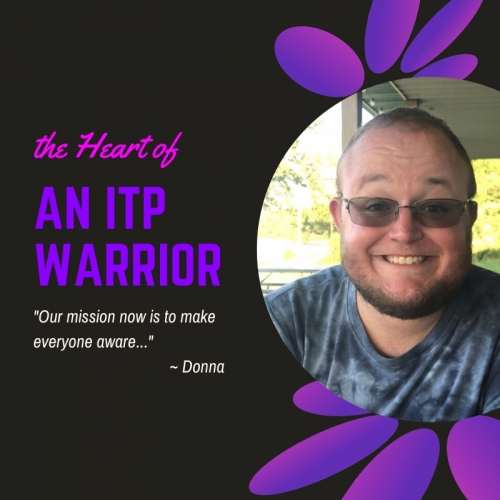 A mother’s moving story, new-found mission and quest to heal.

My name is Donna and I have had ITP episodes 3 times in my life. My son Devin also has suffered with ITP and he had 5 to 6 episodes. The reason I am sending in our story now is that my son Devin passed away from Intracranial hemorrhage complications from ITP on September 20, 2019.

I feel that we have become almost desensitized to the symptoms of ITP after several occurrences, and maybe the doctors are releasing us to soon and with too low of a platelet count.

On September 1, 2019, Devin saw petechiae on his hand and a very small amount on his foot. Nowhere else. No blisters in his mouth at this time, so I told him we would watch it and go to the doctor for bloodwork on Monday, unless more symptoms occurred. The next morning, Devin had mouth blood blisters and more petechiae. We immediately went to the ER and they had him taken to Children's Hospital in St. Louis because his platelet count was 2000. This is how low his platelets have dropped with the other occurrences of ITP as well.

They kept Devin overnight that night and gave him IVIG fluids and the next day he received Rituximab IV fluids. He was released that night to go home and rest and have blood work done every other day as the Rituxan can take a few days to start really working. I was uncomfortable leaving with platelets under 10,000, but the hematologist assured us it was normal to take a few days and he should stay home from work and school.

Wednesday night, the 4th of September, Devin had a horrible nose bleed, his platelet count that morning was 5,000 so, the Rituxan seemed to be slowly working so, when I paged the hematologist she said if we can get the nose bleed to stop, not to rush him over so, after another 20 minutes it did in fact stop. The next day Devin seemed fatigued, but no more nose bleeds, he did have a small amount of blood on toilet tissue when he wiped, but not bright red so, doctor said was also normal with such a low platelet count. So, we trudged on.

Thursday evening, he went to bed early, like 8 pm and we were to get another platelet count Friday morning.  Three am Friday morning I heard Devin in the kitchen and asked him if he was ok. He said yes but was getting ice to hold in his mouth because of the horrible mouth blood blisters and he kept biting one accidentally. I told him text me if he needed me and he said, "okay Mom, goodnight." At 5:35 am, my son texted me that he could not move his right leg or his right arm. I ran downstairs and sat with him while I called 911. They came and took him to a local hospital and they did a CT scan and saw the brain hemorrhage. Devin was more and more unresponsive at this point. They life flighted him to St. Louis Children's Hospital, where they gave him platelets to try to get his counts as close to 100,000 as possible to do a cranial surgery to relieve pressure from the hemorrhage and prayed to avoid major brain damage. The spleen kept attacking the platelets as soon as they were received. They finally did an emergency splenectomy, even though his platelet count was only 2,000 to 4,000 in an emergency attempt to force the ITP under control so they could do the brain surgery. Devin survived he splenectomy, but his platelet count never did go above 40,000. After 24 platelet IV bags, Nplate, and steroids, Devin underwent brain surgery with only 40,000 platelets because time was running out. He did survive the surgery, but never regained consciousness and we lost Devin two weeks later.

We are devastated and in shock as the other 5 times he had ITP so bad, the IVIG and Rituxan took affect over time and all was well, we expected no different this time and are in shock.

Our mission now is to make everyone aware and to tell you to keep yourselves or your loved one in the hospital until their platelets are above at least 10,000. The risk of hemorrhage, though rare, is real, and our lives are now devastated by becoming too comfortable with the ITP symptoms and not pushing to stay in under care until above 10,000 at the very least.

Please pray for our family now as we try to move forward without our son.

The Platelet Disorder Support Association is committed to increasing awareness and understanding around the multifaceted impact of ITP on a patient’s overall health, mental well-being and quality of life and its far-reaching effect on caregivers, family members and the general community at large.  We are grateful to patients and caregivers who bare the unseen bruises of ITP to foster better outcomes for patients with immune thrombocytopenia.