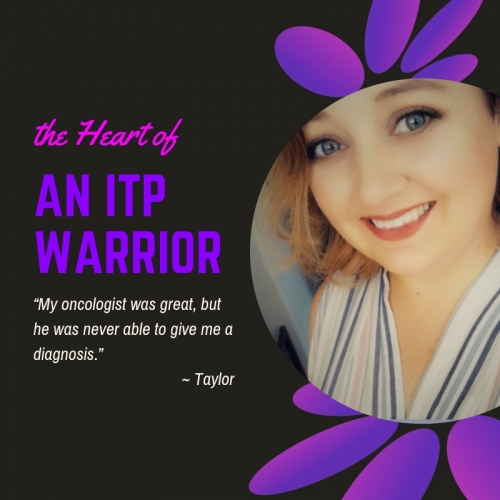 Finding moments of humor to relieve times of uncertainty

When I was two and a half years old, I had a swollen lymph node under my jaw, was covered in petechiae and bruises, and my platelet count was 2,000. My oncologist at the time had run numerous tests, and though he was great, he was never able to give me a diagnosis.

Fast forward to age 13, I was released from care with no answers, but I was healthy. Weird things would happen, like getting sick 10 times worse than other people, but it was what it was.

Fast forward again, this time to 2016. I was watching my favorite show, “Grey’s Anatomy,” with my best friend. On this particular episode, they were performing surgery on a man who they figured out had ITP based on how the operation was going. I looked at my friend and said, “That sounds like my childhood!” So, I investigated. I was convinced.

One more time jump, this time to June 9, 2018. I’m in the ER after getting lab work done and having the lab technician tell me to go in “ASAP” because my platelets were at 12,000. The ER head talked to me and my mother and got my medical history. Then he brought in the chief and my mother repeated my history to him. He leaned towards me and said, “Have you ever heard of ITP?” I told him, “Do I have that, because if I do, I learned about it because of ‘Grey’s Anatomy!” We shared a laugh, he admitted me into the hospital, and I’ve received the best treatment and hematologist a person can ask for!

It was a shock to hear that I have ITP as an adult – I thought it was just as a child – but life throws you curveballs and you’ve got to make lemonade simultaneously. I’m now 25 with a supportive husband and toddler!