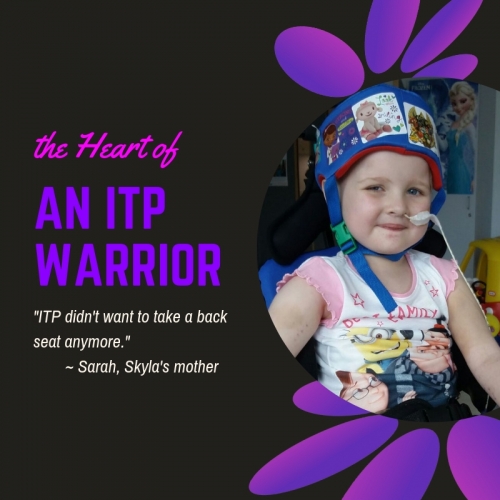 Redefining brave
(As told by her Mom, Sarah)

Treatment was underway for the cancer and ITP pretty much took a back seat, although her counts were constantly under 10,000. She often had blood blisters on the tongue, inside her cheeks and lips, and suffered a few episodes of uncontrollable nose bleeds which saw her admitted into hospital for a few days receiving bags and bags of platelets and blood.

Then came June 2017, when ITP didn't want to take a back seat anymore.

One day she started getting sick, and it was one illness after another. She complained of headaches every now and again, but it was the sickness that stood out more. I assumed she had a stomach bug, and since she’s also an oncology patient, I called the hospital to tell them about this “bug” and how bad it was. They suggested I bring her in to be checked over by a doctor. The hospital is an hour drive away, and she was continuing to vomit in the car and was getting very sleepy. I got her to the ward and a doctor checked her over, saw how lethargic she was, and we both just put it down to this “bug” taking all the energy out of her. She was admitted into a ward and started IV fluids.

She stayed in for the night, everyone still under the impression she had a stomach bug, until a pediatric oncology consultant was doing ward rounds and spotted the signs straight away. She asked Skyla to point to her daddy in the room and she pointed in another direction. She was talking nonsense and couldn’t even open her eyes to talk at this point.

The consultant got a team down to the ward to put Skyla to sleep and whisked her off to have a CT scan. Within an hour we were fetched by a nurse to go up to the critical unit where Skyla went after her CT scan because they found the bleed right away. As we arrived onto the critical care unity, we were met by Skyla’s consultant, and I knew it was bad news as soon as I looked at him. He took us to a computer and pulled up her CT scan, showing us where the bleed was on the brain and how big it was. It was huge.

We weren’t allowed to see her right away – they were putting a big rod into her skull to monitor the pressure inside. After a short while, when they saw the pressure was getting higher, not lower, a neurosurgeon got involved and whisked her off for a four-hour operation where they removed part of her skull (and preserved in her abdomen).

I’m not sure how many bags of platelets/blood she had during this, but she was put on high-dose steroids and romiplostim right away to bring her count up, and this worked. We were told before she went in that she may die on the operating table or that the procedure may not even work.

The operation went as well as it could, and she was placed back in the critical unit in a coma. She still had the rod coming out of her forehead, and for a week I just sat there and watched those numbers going up and down. A few days went by where her numbers were appropriate, so they decided to remove the rod before bringing her out of the coma. She woke up and talked right away. We were told throughout her time in critical care that she could wake up extremely brain dead and/or blind because the bleed happened in the optical part of her brain. So, to hear her talking when she woke up was a massive relief.

A few days later, she was moved to a surgical ward, where we started to notice there was a bit of a problem with her vision. She kept complaining she couldn’t see her iPad properly, and when she finally got back up on her feet she was walking into doorframes and not judging things very well. They sent her to an eye doctor while she was still an inpatient and it was confirmed that she has no left field vision – it had been totally wiped out by the bleed. Her skull was finally put back on a few weeks later when all the swelling had gone down.

Skyla’s platelets were still pretty uncontrollable a year later, and in July 2018, her consultant said it’s time for the spleen to come out. He was not overly keen on this idea but has exhausted all other options and this is literally the last bit of hope.