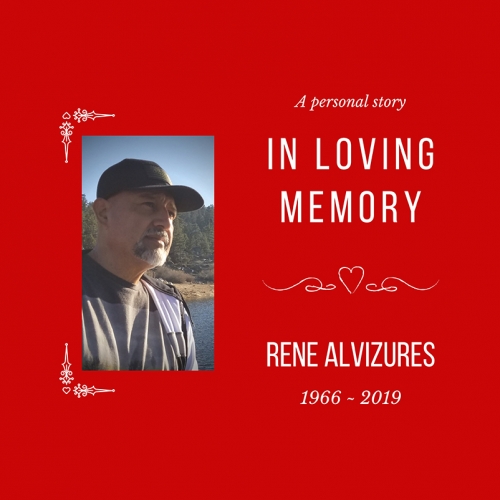 Our overwhelming journey began in April of 2015. My husband Rene noticed that he had developed bruises on his body. They were on his ankles, arms and stomach and he had not bumped into anything. He did not go to the doctor because he had to go to work and did not want to take time off. That same month in April, Rene had a car accident, so he went to the hospital’s E.R. to get checked out. He was checked for any injuries and was cleared from any injuries caused by the accident, but to our surprise, the doctors informed us that his platelets were at 3,000 and that he had ITP. We both just looked at each other and were so puzzled. “What is ITP?” we asked. The doctor explained in detail and that was when our world was turned upside down. It was a nightmare for both of us, especially for my husband who was diagnosed with a condition that many, including us, have never heard about and didn’t know existed.

We immediately did the research, read up on everything ITP and asked so many questions during his doctor visits. He also became a member of PDSA and was inspired by many personal stories of others with ITP. We even attended an ITP group meeting four years ago to see what we could learn. We were always reading all the informational material on the PDSA website which was a godsend. We always looked for ways to improve his condition and someday get rid of it. We knew that there were people that experienced remission, which gave us some hope. We were determined to beat this ITP.

During the four-day hospital stay, Rene was treated with a blood transfusion and an IVIG treatment to increase his platelets. He was also prescribed steroids, which he stopped taking, because of the negative side effects he was experiencing. Effects like rashes and fingertip numbness. Following that, he was then prescribed Promacta® for the following four years but he kept complaining to his doctors that he had horrible side effects. Rene knew he had no other choice and kept taking his medications and took care of himself as best as he could. As his wife, I was able to witness how Rene’s spirit, mind and body were reacting to the medication. He was always tired, had numbness in his fingertips, and later developed vision problems, depression, lightheadedness and dizziness. He also experienced pain in his lower abdomen area and swelling and rash on his legs and feet. His prescription also went up from 50ml a day to 100ml a day for the last five months of his life. He was not happy with that decision. He was very worried about the long-term side effects that he knew where going to take place. He also hated knowing that he had no choice but to take that medication because his life depended on it. Having to take double the amount of prescription worried and overwhelmed him. He was concerned that his liver would be damaged sooner or later. Rene was often recommended to get a splenectomy, but after plenty of research, he preferred not to have it removed. He thought that getting your spleen removed did not guarantee getting rid of ITP and that the risks of not having a spleen were not worth the risk.

Beginning June of 2019, the side effects went from bad to worse, took place in just five months and he even developed macrocytic anemia. He had a relapse in September 2019 and his platelets went down to 9,000. This was his first relapse since first being diagnosed in 2015.

ITP is a condition which many people don’t know about. It is also a condition that only those with it know what they feel and go through on a daily basis. The battle goes on inside the body even though the person might appear to be fine on the outside. The constant fatigue was always present but was something he had to learn to live with. The anemia and other health issues only complicated things. Rene’s health took a turn for the worse during the first week of November 2019. It lasted for about a week. On the morning of November 11, 2019, he asked me to take him to the hospital because he couldn’t take it any longer. He was there for four days and on the fourteenth, he unfortunately passed away due to heart complications, but did not have any type of heart issues whatsoever. During his stay at the hospital, he was given blood thinners as a result of not getting enough oxygen and blood to his heart. I thought it was ironic to need blood thinners after years of taking prescribed medication to help clot his blood. Sadly, Rene’s body and heart went through so much due to suffering two silent heart attacks, but he remained strong until the very end. He was my trooper, that’s just who he was.

Three weeks before Rene passed away, he told me that he wanted to be a voice for ITP and have others learn about this condition. Unfortunately, he wasn’t able to do what he wanted, which is why I am his voice now. I want people to hear and learn from both his experience and daily struggles of living with ITP. As Rene’s wife, I am compelled to share his story because he wanted me to let other ITP patients know that it is important to listen to your body and to advocate for yourself. Whether it pertains to your health, medication, side effects or prescribed dosage, speak up! Getting tested for the H. pylori virus/bacteria may be one thing to consider when you have ITP. He found out he had it and was able to get rid of it with medication. Rene was hoping that one day soon, there would be much more research and eventually a possible cure for ITP. Sharing ITP awareness and his personal experience was his mission. He did so with as many people that he would come in contact with. If anything, please learn from his experience because you might be able to prevent having a negative outcome like mine.

One thing for sure was that Rene never gave up; he remained hopeful and always kept a positive attitude. Rene had a million-dollar smile that would light up any room. His wonderful sense of humor, energy and cheerful personality was what made him such a special and loved human being. To those who did not get to meet Rene, I have a message from him; stay positive even though it may not be easy. Stay strong and push yourself when you have little or no energy. Have hope when there is very little or none. Smile and be kind to all for everyone is going through their own personal battles. Last but not least, live life to the fullest, learn to forgive and don’t take things for granted. Rene enjoyed and loved his life. He believed that love made life worth living. Rene may be gone but his spirit and memory live on forever in the hearts of all those he touched.

This ITP story is to celebrate Rene and is dedicated to the love he had for his children Keila 33, Bryan 31 and his wife Rocio who was happily married to him for 34 years.