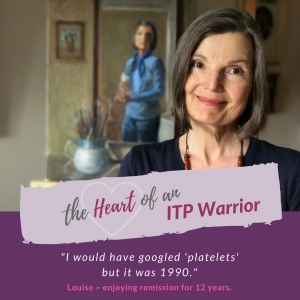 A therapeutic approach to healing

On the night of my 40th birthday, I got a call I’ll never forget: my doctor was telling me to get to a hospital because I had “no platelets”. I had no idea what that meant!

I would have googled “platelets” but it was 1990. There was no google and no PDSA. I was on a scary journey without a guide or a map. That journey was to last 16 years.

During that time I tried every medical treatment available — including chemotherapy and splenectomy. None of these worked. Prednisone helped but the side effects were awful. I searched for alternatives in vain.

Then one day at a health food store, a book on Macrobiotics caught my eye. Miraculously, it mentioned ITP! It was just one paragraph, but it convinced me. From that night on I ate only veggies, rice and beans. Prednisone side effects lessened. Within weeks I was completely free of ITP. Things continued this way for several years… until I became anemic.

I was told I needed to eat “normally” again. To be honest I was thrilled. I’d missed pasta and breads and desserts. And I loved eating out again with friends. But weeks later I landed in the hospital, my platelets again at 1K. I was back to prednisone and seeking answers.

My hunt led me to psychology. Every episode I’d had with ITP came on the heels of major stress. If I could change my thoughts, I wondered, could I change my health? Emerging research seemed to support this.

I tried various therapies and stress relief techniques. They helped but my platelets were still low. In 2006 I crashed again. This was my 7th go-round with ITP.

Then I stumbled onto something that I believe made all the difference for me.

You see, I am a painter by trade; still life is my specialty. But when I returned home from yet another blood test with counts stuck on “low”, I was ANGRY. I went to my easel, took a big glob of paint, and started painting from that ANGRY place inside me. I smeared and splotched and totally destroyed the still life I had been working on. But it felt great! I felt powerful! Not just emotionally but physically! Day after day I continued painting this way, feeling stronger and stronger. The results of my next blood test were unprecedented: my counts had leaped to normal.

Did the painting do that? Who can say? All I know is I have continued this practice and have had normal blood tests ever since — eleven years now and counting!

But life has surprises. That’s why I support PDSA. It’s comforting to know that PDSA is there with information, inspiration, and caring help. Even though I discovered it after I had achieved good health, PDSA still helped me. Here is a fun postscript:

Remember my macrobiotic diet? Well, a 2008 PDSA newsletter carried a small item referencing a possible connection of ITP with celiac disease. Bingo! My sister had been diagnosed with celiac as a baby. In all probability, I had it too. This explained why the macrobiotic diet worked for me, as it mostly eliminates gluten containing foods. Thanks to PDSA, I have been deliciously gluten-free for years, and have never felt better in my life!

Wherever you are in your ITP journey, I wish you good food, good friends, and good feelings! I’ve discovered these go a long way toward wellness, and you can find the last two especially through PDSA!

Louise Kittel is an artist and certified positive psychology life coach who helps people craft better lives out of difficult circumstances. Contact Louise and see her art at http://www.louisekittel.com.