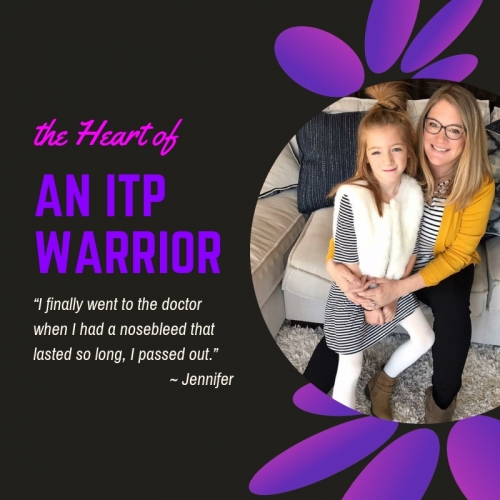 Nosebleeds, petechiae and the fear of never bearing children: now a distant memory.

I was diagnosed with ITP when I was 16 years old. I kept getting nose bleeds that would last for hours and bruising all over. I remember seeing red dots cover my skin, not knowing that it was petechiae. I finally went to the doctor when I had a nosebleed that lasted so long, I passed out. When I got to the doctor’s, they did what I remember them calling a “bleed time test” to time how long it took for three small pricks on my arm to stop bleeding. They went through at least 50 sheets of filters absorbing the droplets of blood as minutes passed and passed.

The longer I sat there, the more doctors and nurses would come by and check on me, and the more the staff began to whisper outside the exam room door. I remember my mother getting more and more nervous as she flipped through a magazine. I know now, looking back, that she wasn’t reading a single page. She was trying to appear calm for my sake, but she must have been so scared.

Finally, they sent me to another room and the doctor came in. He started by saying that I have symptoms of a serious problem with my blood. His exact words were, “We don’t think it’s leukemia, but we need to find out immediately what is wrong.” He then went on to explain blood platelets, which neither my mother nor I had ever heard of. He explained that normal counts were above 250,000 and my lab showed that I had 11,000. He said, “I cannot believe you are not in a coma right now.”

They told me to go to the hospital right away. For three hours, we thought that I may have cancer. My mom just sat next to me in the hospital bed and held me. I don’t remember her exact words, but I can still hear the comforting tone of her voice.

They kept me in the hospital for monitoring for several days. Many tests and blood draws later, they discovered that my spleen was killing my platelets, so they decided to start me on prednisone, which helped keep my platelets up. They experimented with different doses and each time they cut back on the steroids, my platelet count would drop. The highest count I could get up to while on steroids was 150,000. I was able to return to school my senior year but didn’t drive and took severe caution in my activities. Many times, I would sleep for hours, get extremely exhausted, and my menstrual cycles lasted weeks. During that summer and fall, I had two more hospital stays and was ill due to the fluctuating steroid doses.

In October of that year, the doctors decided they wanted to remove my spleen. They increased the steroids drastically because loss of excess blood would be a dangerous possibility during the surgery. In December, I had a laparoscopic splenectomy. Within hours, my platelet count was at 250,000 and continued to increase without steroids over the next few days.

Since my surgery 16 years ago, I’ve never had a problem again. I am thankful every day for my health and the two beautiful children I have, remembering those days during the tests when having children was something that could possibly not be an option for me due to my health.

I know that many people have long battles with ITP, and I am grateful for my health. Going through these experiences makes every moment in life more precious.