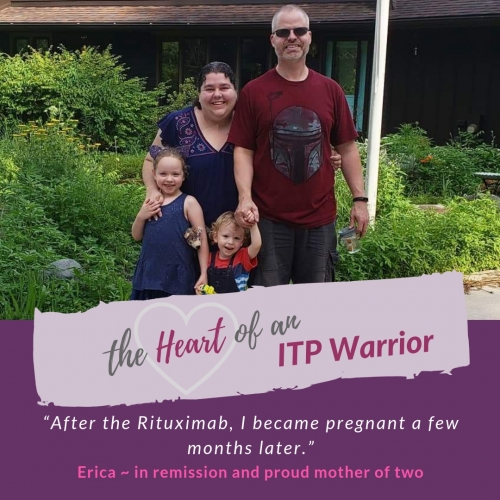 A shocking diagnosis and last-ditch treatment effort harvests one of life’s greatest blessings.

Like many other people, it was never fully understood how or why I ended up with ITP. I was on the city bus one day with my husband, heading home from work. I felt a sudden jolt of panic, but I couldn't pinpoint why or what was wrong with me. We got off the bus a few stops early to get some fresh air and walk the rest of the way home. Another wave of panic set in and all I could repeat to him was, "Something is wrong, something is wrong." We went to the emergency room and they performed a few tests – EKG, flu test – and they gave me some fluids intravenously to hydrate me. They did not do a complete CBC and so they missed what was happening. In fairness, I had no clues to give them. I had told them that I was having a horrific menstrual cycle that would not stop bleeding. It was the heaviest that I had ever experienced, but I had very abnormal cycles. As I did, they chalked it up to my reproductive medical problems. They gave me pamphlets on heavy menstrual cycles and sent me on my way.

The heavy bleeding continued for two more weeks. I kept having feelings of panic and malaise, though I didn't have anything to prove there was something wrong. Finally, I went to my OB/GYN and my primary physician. My OB/GYN was baffled. There was, physically, nothing wrong with me. Even my ovarian cysts seemed to be abated for the time being. She gave me a hormone shot to try to stem the heavy bleeding, but to no avail. I went into my primary physician's office and began to sob. I apologized and told her that I knew something was wrong, but I had no "proof." Luckily, I had a wonderful physician who happened to study blood disorders during her residency. She asked me if I would mind running down to the lab to do a quick blood test. I went straight down to have a complete CBC. Within the hour, I had found out I had an estimated 2,000 platelets left. My doctor asked me to return to the hospital immediately.

Once admitted, they gave me IVIG, prednisone, a blood transfusion, and a plasma transfusion. I was terrified and I couldn't believe this was happening. I didn't even know before this that platelets could be destroyed. They ran tests and found out that while I was producing platelets, my body was destroying them. My counts went up with the IVIG and transfusions, but dropped after 48 hours. I was a refractory from the prednisone. A splenectomy was scheduled and I was sent home to wait.

It really was the closest to death that I had ever felt. I realize how dramatic that may sound to people. But they explained to me that if I had an accident, or a medical emergency, I would be in grave danger. My husband sat on the floor as I lay on the couch and never left my side. He would put on comedies or movies that he knew I would watch with my family when I was a child. He helped me live through that scary time.

Before surgery they had me see my hematologist again. He and another doctor asked me if I would take Rituximab before they went in for the splenectomy. At that point I was willing to try just about anything. I began the infusions and after the 3rd infusion they saw a steady rise in my platelets. It was the beginning of the end of a four-month ordeal. They are, to this day, not sure what caused the ITP. I do have Sjogren’s syndrome as well as polycystic ovarian syndrome. The Sjogren’s, in particular, has created many other problems with my delicate system, but there is no strict proof that it was the cause.

After the Rituximab, I became pregnant a few months later. My husband and I had tried for children for eight years with no success due to my medical problems. I will be the first to tell you that they had no idea, and no evidence why I was able to get pregnant at that time, but for us it was a miraculous blessing.

Our daughter is turning 7 in October, and we also have a son who is 2.

From great hardship came the sunshine of my life.

My platelets since the Rituximab have not gone below 175,000. Most of the time, they are upwards of 225,000. I am eternally grateful for the doctors who took enough time and gave enough care to save my life.

I wish the best for all of you and think of you often, those brave people who battle ITP regularly. You're in my heart.