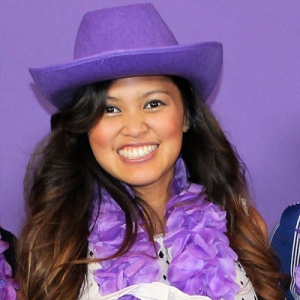 Good morning everyone. My name is Christina. I am in otherwise healthy 26 year old who was diagnosed with ITP in December, 2014. I am currently a 3rd year medical student at Indiana University School of Medicine. It was during my internship two and a half years ago, when I was working as a research assistant at the University of Illinois, that I had my first exposure to hematology through personal experience. While working in the research lab in December, 2014 I had recurrent nosebleeds that lasted over 4 hours. I was admitted to Rush University Chicago hospital with the hemoglobin of 6 and 10,000 platelets. I received a platelet transfusion the same day, which further dropped my platelet counts to 6,000. The hematologist later concluded that the platelet transfusion stimulated my immune system even more, which caused a further decrease in my platelets.

After I received IVIG treatment the next day, my platelets increased to 45,000. I received two days of IVIG and was discharged with 54,000 platelets. Since ITP is a rule-out disease, they did a variety of tests on me which all came back normal, except my low platelet count and low hemoglobin due to persistent nosebleeds. I was started on 50mg of Prednisone daily. One week later my platelets dropped to 17,000. My hematologist doubled my Prednisone dose to 100mg daily. I had severe side effects from the Prednisone. I could not sleep, I was eating everything, and I was gaining a lot of weight. Thankfully, I responded to treatment and my platelet counts increased to 200,000 and I was slowly tapered off the Prednisone.

Since this time I have had a relapsing and remitting course. Again in August, 2015 my platelets dropped to 30,000 during my first year of medical school and I was put on another course of steroids. I discussed treatment options with my hematologist, Dr. Paner at Rush, and she recommended a splenectomy or Rituximab as chronic treatment options. I decided to pursue rituximab if my platelets were to decrease again. So one year later in August, 2016 my players started to decrease to 50,000 as I began my second year of medical school. My insurance would not approve Rituximab until my platelets were below 30,000, so we were checking my blood counts every week until they were low enough to receive treatment. They were hovering between 40,000-50,000 for two months, and on October 27th, 2016 my platelets were at 35,000. The next week my platelets dropped to 10,000 and I was rushed to the ER. I was admitted for three days and treated with IVIG and Prednisone. I was scheduled to start Rituximab treatment on Friday, October 28th but was informed it was declined by my insurance. I was frustrated and confused as to why my treatment was denied, however my hematologist that it is common for insurance companies to deny costly treatments like Rituximab, and they would submit the request again to my insurance. Upon further discussion with my hematologist, I mentioned my plans to start a family in the near future after I graduate from medical school. She advised me that I would not be able to receive Rituximab treatment while pregnant. I then decided to see if splenectomy was an option for me.

I attended the PDSA Chicagoland ITP support group, hosted by Miss Trish Beattie. This was an invaluable resource for me since I discussed my treatment and ITP course, and was able to hear how others are coping with their ITP. Miss Beattie suggested that I do more research into getting a splenectomy and look into the indium platelet test, which was mentioned during the ITP Conference last year in Orlando, Florida. Splenectomy is a treatment option for chronic ITP, however the success rate of a splenectomy it's only 60%. This is where the indium platelet test would possibly yield more information if a splenectomy would be successful. The indium platelet test is a nuclear imaging test that labels platelets with indium. Using nuclear imaging techniques it demonstrates the site of platelet clearance. Patients with platelets being cleared mostly by the spleen demonstrated a higher response rate following splenectomy then those with platelet clearance from the liver or the lymph nodes. I was interested in getting the platelet test in St. Barts in the United Kingdom, since they don't have an indium platelet test here in United States. I contacted Dr. Neil Hart from St. Barts and he provided me with information about the indium platelet test. They require that your platelets be between 20,000 and 100,000, meaning that you have to have active ITP in order to get the test done. Unfortunately I was not eligible for the test since I finished my high-dose corticosteroids treatment and my platelets were over 250,000 at that time. In addition, they recommendeded that ITP patients should avoid IVIG or Anti-D treatments within two weeks of the test date. So the cost of the test is approximately 2,000 euros, and that does not include transportation or hotel accommodations and it is not covered by insurance.

Dr. Adam Cuker, who is an ITP specialist at the University of Pennsylvania, recently wrote a research article about the indium platelet test. I discussed this text with my hematologist, Dr. Paner, and she recommend that I see doctor Cuker as a second opinion. So I scheduled an appointment in January, 2017 and my parents and I drove fourteen hours to the University of Pennsylvania to meet with Dr. Cuker, which was well worth the trip. He was very thorough and knowledgeable in his treatment for ITP, and he discussed his research in ITP and presented four options to me for maintenance therapy, or second-line therapy, which were splenectomy, Rituximab, thrombopoietin receptor agonists, and low dose Prednisone.

I discussed my concerns with him in regards to the splenectomy, since I met with Dr. Segreti from infectious disease at Rush University on December 19th. Dr. Segreti advised that if I get a splenectomy my chances of sepsis are fifty times greater than the general population even with vaccinations. If we're to have a fever over 101 degrees I would have to take antibiotics right away and go to the emergency room. I even received the pre-splenectomy vaccines. I also discussed the indium platelet test with Dr. Cuker. He said the major reason the indium test is not available in the United States is that most experts are skeptical about how predictive it really is. So there are patients with clearance from the spleen that don't respond to splenectomy, and there are those with a non-spleen clearance that do respond. So after meeting with Dr. Cuker I chose to consider that option only after all other medical treatment options no longer worked for me.

I'm currently on the low-dose Prednisone treatment at 5mg every other day and my platelets are currently stable at 150,000 since starting the Prednisone in January, 2017. He recommended this option for me since I'm sensitive to steroids and a low dose of Prednisone might be all I need to keep my platelets up. I inquired about the risk of taking medications that could be triggering my ITP, since I contacted Dr. Steven Thome, from the Mayo Clinic, who mentioned that quinine or tonic water and bitter lemon and some herbals could trigger ITP. Dr. Cuker advised that prior to deciding on getting a splenectomy, I can discontinue my medications to see if that could be triggering my ITP. So then I decided to discontinue my birth control in January, 2017. In March, 2017 my husband and I found out we were pregnant, and I'm currently five months pregnant and we’re expecting a baby boy this December, 2017.

From my experience with ITP, I learned that you can take control of your illness and not let it overcome you. I was able to make an informed decision for my ITP treatment that I do not regret and I feel more in control of my disease than I ever was. A weakness I overcame was reaching out to various healthcare providers and going above and beyond my comfort zone to seek answers from St. Barts in the United Kingdom, Dr. Adam Cuker, and numerous physicians from infectious disease, emergency medicine, and surgeons to understand my treatment options and the best options for me. Some resources I used to contact hematologists included going on the Association of Hematology website and searching hematologists under the “find a hematologist” link. Or I was able to get in contact through email with numerous hematologists including Mayo Clinic.

The PDSA website has a vast majority of ITP information where you can find an ITP doctor near you. In addition there is contact information and emails of the authors and research article where you can email the researcher who published the article and answer questions or additional information, and that's actually how I got in contact with Dr. Adam Cuker. I was grateful that all the healthcare providers I reached out to were willing to share their knowledge with me. Some hematologists even offered to provide phone consultations at no cost. And I know this is an ongoing theme at PDSA, but it is true that you have to be your own best advocate, which is what all of you are doing now by attending amazing conferences like this ITP Conference where you can hear first-hand experiences from patients and experts to make an informed decision about your treatment. I also found it highly valuable to utilize all resources such as reaching researching information and articles on the internet, which is how I found out about PDSA, and also getting a second opinion from and ITP expert, which was the best decision I ever made in my ITP journey.

ITP has changed my life because I have the opportunity to help others in the same position who have a chronic illness. As a future physician, I have great interest in this field of hematology. I want to learn more about how the physiology and mechanisms of how blood disorders arise and novel therapies to treat patients with blood disorders. I Now understand the complexity and stress having an illness can place on patients and their families. There are times I was confused, overwhelmed, and frustrated at what treatment I should pursue or when my ITP was going to relapse. It hindered my studying and my personal life, but overall it has motivated me to become a knowledgeable future physician, and above all a patient advocate.

The PDSA has given me a sense of belonging, and I'm very thankful to have a support association where I can connect with others who have ITP and share first-hand experiences, how we cope with ITP, and the resources and novel treatments available. I am honored to be part of the PDSA and share my story with you today, and I know that we all can make a difference and conquer ITP together. Thank you.