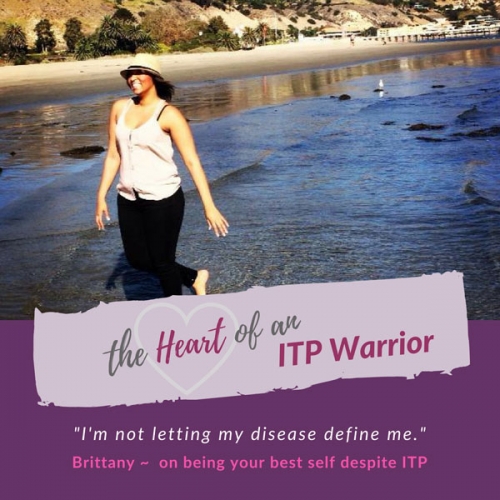 A seemingly normal day unveils irregular bruising and is the beginning of the journey for this young, active woman.

In September of 2005 I was diagnosed with ITP, immune thrombocytopenia. It was what I thought was a normal day playing a sport that I loved, Volleyball, and I noticed abnormal bruising that would not go away. The bruising lasted for nearly almost a month and I knew something was not right. ITP is an autoimmune disease in which your body makes antibodies against platelets. In autoimmune diseases, the body mounts an immune attack toward one or more seemingly normal organ systems. In ITP, platelets are the target. For anyone who is unsure, a healthy platelet count ranges from 150,000-400,000 platelets per microliter. My lowest platelet count throughout my journey before my splenectomy was 4,000.

One of the most frustrating aspects of living with this disease is the unknown and having to explain. More often than not, individuals are not perceived as “sick” unless they are visibly ill. People think you are faking it, over exaggerating, etc., and do not take the disease seriously because you look healthy from the outside. One of my most scary days was in 2007. I went into UNC Children’s Hospital for my monthly WinRho® IV treatment and I could not stop bleeding. First it started with a nose bleed, my mouth and super heavy menstrual cycle. The Nose & Throat doctor had to be called to my room right away as my nose did not stop bleeding for hours. The scariest feeling in the world is not being able to control your own body. The feeling where you are no longer in control of what is about to happen next. WinRho® is a medicine used to treat immune thrombocytopenia (ITP). It is given to increase the platelet count.

For five years I lived day in and day out with the rollercoaster of ITP… massive doses of steroids, blood clots in my mouth, numerous hospitalizations and weekly blood draws. In January of 2010 I had a successful splenectomy, but now I have the worry of my platelets being too high. The spleen is responsible for removing these damaged platelets and therefore removal of the spleen can help to keep more platelets circulating in the body. Removing your spleen is a major surgery and leaves you with a compromised immune system. For these reasons, it's only performed when truly necessary. The benefits of a splenectomy are that it can resolve several health issues such as blood diseases, cancer, and infection that could not be treated any other way. In my case, my spleen had to be removed because of how bad my ITP had enlarged. An enlarged spleen traps platelets and prevent them from circulating in the bloodstream.

I am still not out of the clear being that the Splenectomy worked, but now I have the issue of my platelet count being too high. Every day in life is a journey but we have to be thankful for what we have. I’m not letting my disease define me. Each and every battle that I have occurred with ITP has allowed me to grow as an individual. ITP has molded me into the person I am today and I am very proud of how far I have come. My passion is to raise awareness for ITP and I am hoping that organizing a walk/run will do just that. I am praying that one day there will be a cure for this disease, but until then we will fight until we can’t anymore.