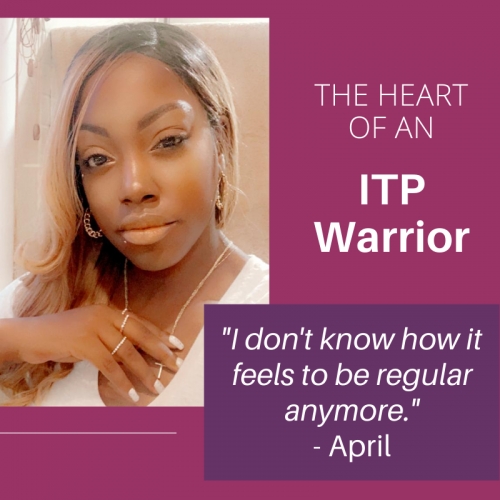 My name is April Brimmer. I am 34 years old and I have ITP. I never knew what a platelet was, let alone ITP.

It was July 6, 2012, and I was bleeding extremely heavily due to my menstrual cycle – so much that I blacked out and had to be rushed to the emergency room. The doctors ran multiple tests and after several hours said my platelets were at 3,000. I thought, great, they found out what it was, now I can go home to my one-year-old daughter. But that was not the case. I couldn’t leave the hospital and I panicked. I had never been away from my only child and had nothing prepared for her – that was the worst feeling.

I was admitted to the hospital for two weeks. No amount of steroids or injections worked. I met with a hematologist that suggested IVIG, and it sustained my platelet count for approximately three weeks. For one year straight, I had to be admitted to the hospital once a month for four to seven days at a time for IVIG treatments. I also had my spleen removed.

I went into remission for two years, but now my ITP is back. My platelets have dropped to 1,000. It’s such a stressful disease that has a mind of its own. Now I’m up to seven auto-immune diseases.

I had a fairly healthy life, and now I don’t know how it feels to be regular anymore. Since there is no cure for ITP and it has a mind of its own, my hospital stays have become more frequent. Not being able to work due to the uncertainty of this disease has caused financial hardship. It became a challenge to be a full-time mother and provide for my daughter, but by the grace of God, He makes all things possible.

It took me a while to realize my life would never be the same. Although this disease is not easy to navigate, I’ve learned to look at the positive outcome of it all. Becoming more appreciative of life and empathetic towards others. Although this illness takes me away from my daughter due to hospital admissions, she looks up to me as a strong mother and I couldn’t ask for anything else. In her eyes I’m the strongest person she knows and I’m hoping this shows her that no matter what obstacles you are presented with on your life’s journey, you can and will make it through as long as you keep your faith first and believe that all things are possible.

I am currently taking Promacta® and still receiving IVIG treatments as needed. I’m at peace with having this illness although it is challenging.

The PDSA has been such an important outlet to connect with others that can relate to this illness, and I am grateful for the support. Thank you so much for allowing me to share my testimony and to anyone who took the time to read this. I aspire to inspire anyone to continue this fight knowing support is the most vital thing to have while dealing with ITP.