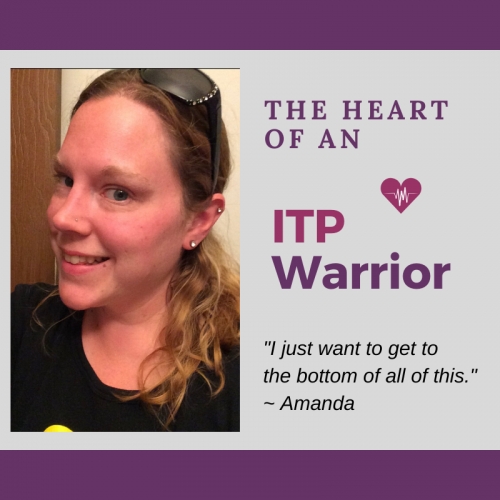 This story is adapted from a letter Amanda wrote for a doctor in New York City, September 2019:

Nineteen years ago, I was diagnosed by a doctor in Syracuse with ITP. I had frequent bruising, severe bloody noses, and migraines when I was a child. I was hospitalized for some of the bloody noses and migraines.

Back in April 2008, I had an emergency C-section. I had developed preeclampsia and toxemia during my pregnancy around 20 weeks. I was taken out of work and put on bed rest. I became very sick the night of April 13, 2008, and the early morning of April 14, 2008. I was taken to the hospital in Binghamton, then transferred to Crouse Irving Hospital in Syracuse, NY. I was in a lot of pain from my organs swelling. My platelets dropped from 30,000 to 15,000 in the time it took me to get from Binghamton to Syracuse. They did not perform my C-section until 10:38 p.m., as they needed to give me platelets beforehand. My daughter was born at 1 pound, 8.5 ounces, 13 inches long. The doctor who did the procedure told my family that it was up to me to stop bleeding. Thankfully I pulled through. I recovered at the hospital for a few days and then stayed at the Ronald McDonald House in Syracuse until my daughter left the NICU to come home – about a week before her July due date.

In 2015, I had an endometrial ablation because my period was consistently very heavy, and I was also very tired and weak during my cycle time. I did well with this surgery. In February 2017, I had a regular check up with my family doctor because I was feeling quite tired, weak, and sore. My platelet count at that appointment was low – 38,000. My family doctor suggested that I go to see my oncologist again, so I did. Ever since that appointment in 2017, I have become anemic. After becoming anemic, I have had a handful of RBC transfusions when my hemoglobin drops below 7.

My ITP has become worse because my platelet count has stayed low since that 2017 appointment. Due to my counts consistently staying low, and sometimes dropping below 15,000, I have also had to have some platelet transfusions. My oncologist had me try many different medications and treatments to try to help my disorder, including: prednisone, Promacta®, Rituxan®, Nplate®, IVIG with platelet transfusions – or just platelet transfusions, and two bone marrow biopsies. Nplate® is the only drug that has helped my platelets rise, but I dealt with painful soreness in my legs and joints each time I had the shot. The other medications did not work for me, nor were there any significant findings in my biopsies.

I then had a splenectomy in December 2018 at Roswell Park in Buffalo, NY. They gave me platelets during the procedure. We were hoping that my ITP would get under control after removing my spleen, but my platelets did not rise. This past July I tried Tavalisse®. It did not work for me. I have still been needing transfusions, with or without IVIG, to bring my platelet count up, but the number drops again and again. I have been going to my oncologist for weekly CBC blood work ever since having the splenectomy.

I also have three teeth that need to be pulled out, but in February 2020 my oncologist told me that it is too risky to have the extractions, and it is also risky for me to even have fillings with Novocain. My mouth is very sore because of the teeth I need pulled, and my gums are always swollen. I will be talking to another oncologist in Buffalo about this situation.

I am still continuing to have platelet transfusions when my count goes below 13,000, as well as transfusions to boost my hemoglobin when that drops to 7. My oncologist seems to believe that he has tried me on most medications to treat ITP, and none of them have worked for me. I am mentally and physically exhausted from having to go to the doctor weekly for blood work, and on top of that having to have these transfusions so often. I just want to get to the bottom of all of this and hopefully figure out what we have to do to help my condition.”