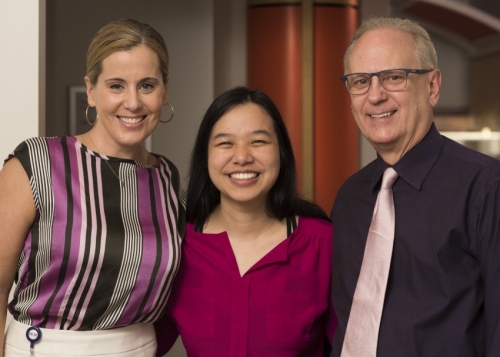 "Sara’s lab results revealed abnormal blood levels, including a platelet count near 11,000. Platelets help stop bleeding by clotting; a normal person’s platelet count can range from 150,000 to 400,000. In most cases, surgeons won’t perform surgery on someone with a platelet count under 50,000. At 11,000, Sara was at risk for serious internal bleeding.

Our attending hematologist, Dr. Jenny Despotovic, eventually diagnosed Sara with immune thrombocytopenic purpura (ITP), a rare autoimmune blood disorder in which the body’s immune system attacks and destroys platelets. Dr. Despotovic recommended an immediate blood transfusion and steroids as a first line of treatment. We were hopeful when Sara’s platelet count rebounded initially, but she required another blood transfusion and round of steroids when her count plummeted a few months later. Though this helped stabilize Sara, her platelet count dropped to under 10,000 by late July."